It's never too late! 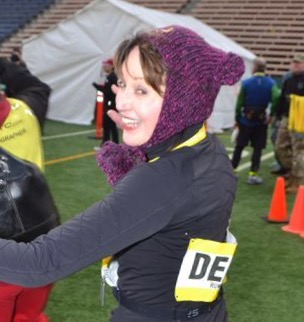 
My running story began only a little over five years ago, competing a short local 12K race. While I didn't break any speed records, it was such fun that I decided to attempt a half marathon 2 months later in San Francisco. It was held on the actual day of my 69th birthday. Again, no speed record but I did complete it in quite a respectable time with both my daughters running at my side!

I've since run other half marathons, full marathons, 5Ks, 10Ks, 12Ks and 15Ks. In 2015 I was selected to be one of the first-ever Ambassadors for the Seattle Marathon Organization--a true honor and privilege! In representing the group in Washington State I tried to encourage other seniors to share in the fun of challenging themselves in races--even if their ultimate goal was to walk a 5K!

What makes my running significant is that I have 5 spinal fusions. Surprisingly, the running is therapeutic--love those endorphins! Additionally, I'm almost totally deaf! Though, even after receiving a cochlear implant 18 months ago, I still sport my 'deaf runner' bid for races and training--as in the photo just after completing the Seattle Marathon.

I am so impassioned about exercise that I wanted to share my enthusiasm with my local community and, as such, I began a walking group in late January 2015, consisting mainly of seniors. With so many older folks incapacitated due to chronic illnesses, it's even more critical that they keep moving. Both the exercise and the socialization that goes along with such an activity are essential elements of health in later years. Plus, if there is indeed a fountain of youth, it's exercise!

Here is what our subscribers are saying . . .

"Thank you for your newsletter. I loved it, and please keep them coming. I found the last one very inspiring. I like the food control portion a lot." -Amy Harwood

"My wife and I are just now starting to get off the couch and back in shape . . . we have a ways to go but you two are an inspiration." -Joey & Lynn Everhart

"Thanks Logan for your inspiring newsletter each month. I have taken your advice and am riding my stationary bike 20 minutes each morning and just started using my Weider Crossbow. I am feeling better each day." -Dennis C. Ewert (64 years old)

"As an almost-52 year old woman who's just gotten 'turned on' to weightlifting, I really appreciate your newsletter and look forward to getting it." -Wanda Araujo

"Really enjoyed your thoughts on retirement in the latest newsletter." -Larry, 56

"Great articles. I look forward to your newsletter and the interesting and informative articles you share." --Pete

"I love your newsletter. May it go on forever."

Always consult with your physician before
making dietary changes or starting an exercise program.