My training partners were Rich Lalami, Duane "Whitey" Thomas, Don Randall, and Nick Romanoff. Nick played professional basketball in the American Basketball Association, which eventually went out of business, with many of its players being absorbed by the NBA. Nick and I were bachelors and roomed together for a while. For sport, we took part-time jobs as peacekeepers at a San Francisco beer garden called "The Monkey Inn," one of the hottest singles places in the city. The pay was minimum wage plus free beer. Nick rarely drank the beer, but I consumed my share. The girls were young and beautiful. We had discovered paradise.

The workouts at Walt's were serious matters, so to lighten things up we became highly adept at adolescent pranks. A particular favorite of Nick's was to peel a banana, cut off a two-inch tip and slip it into the toe of someone's athletic shoe. I think everyone in the gym was a victim at least once. One day Walt had to leave the gym and Nick and I and a couple of others completely stripped his office. The desk, chairs, filing cabinets, charts and everything were removed and hidden. When he returned to a barren room everyone was out on the floor lifting weights, behaving as though nothing had happened. No one so much as smiled or looked his way.

Walt was a few years older than we were and his pranks were a bit more sophisticated and involved precise timing. You might be on a bench struggling for that last rep as he would very casually pass by and drop a towel on one end of the bar. Of course you'd start to laugh, lose concentration, and the weight wouldn't go up. Years after I had last seen him, I was pushing open a door to enter a San Francisco restaurant when someone on the opposite side placed his foot against it and stopped me in my tracks. I looked up, and there was Walt on the other side of the glass with a sly grin on his face that said, "Gotcha!"

I grew bigger and stronger at Walt's. At 5'10 ½," I weighed a solid 199. The dumbbells in the gym went up to a pair of 105s, and I could really knock out the reps benching the big ones. Still, I was a miniature next to Nick, who stood 6'8' and weighed 260 or more. All prime muscle. At The Monkey Inn, the employees wore black and white referee shirts. Thinking back, I realize how appropriate it was. The Monkey Inn was like Spring Break at Cancun.

Part of our job was to get people started with sing-alongs, and everyone working there had little entertainment specialties that kept things moving. Sometimes Nick and I would hoist heavy beer kegs that most people couldn't budge. If the girls called for us to remove our shirts and show our muscles, "reluctantly" we would comply. Very suave.

Of course all the frivolity would eventually play itself out. One by one, we went on to schools, careers, or got married and started families. Maturity happens. In the decades that followed, I stayed fit with activities ranging from martial arts to swimming, running and handball. I put the weights aside, however. Walt's, was the last weight training gym that I belonged to until I was nearly 59 years old.

About my friends and training partners: Walt eventually left the gym business and became a successful custom home builder. Don Randall is retired and lives in a small town in the Sierra foothills. Off and on, he has continued working out. I lost touch with Whitey Thomas. Rich Lalami became a math teacher and football coach and was a strength coach at Stanford University. We remained close friends. He taught me to play handball. I was best man at his wedding. Nick Romanoff retired from basketball, continued weight training, and could build from scratch anything from a house or office to beautiful custom furniture. I was also best man at Nick's wedding. Sadly, Rich, Nick, and Walt have passed away. 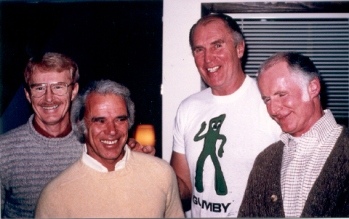 A reunion on the occasion of Nick Romanoff's 50th birthday. From left to right: Logan, Walt Texeira, Nick Romanoff and Don Randall. From the looks of things, we were probably up to no good.

Return from Walts Gym to Muscle stories and Fitness Interviews

Always consult with your physician before making dietary changes or starting an exercise program. © Copyright 2008-2023 Senior-Exercise-Central.com. All rights reserved.